For the 33rd time since 1988, Wings of America will sponsor a team of the fastest Native American runners ages 14-19 to compete at the USA Cross Country Championships. This is a special team, as they will be the first runners to compete in Wings uniforms in nearly two years, due to the pandemic. Eight young men and eight young women will represent the organization in the “junior” age division races at Mission Bay Park on January 8, 2022 in San Diego, CA. With the help of Wings and their high school coaches, these student-athletes will train through the winter holidays to stay in shape for running competition. Only one member of the 2022 Team, Whitney James from Ganado, AZ, was part of a previous Wings National Team (2020).

Runners were selected for the team based on their performance at post-season championship races, including Nike Cross Regionals and Eastbay Regionals. After an open registration period in which runners identified themselves as eligible for selection, those with the 8 fastest regional qualifying times were invited to be a part of the team. One qualifier, Lorianna Piestewa, decided to pass on the opportunity so that she could honor a prior commitment to her wrestling team. Her spot was offered to the 9th qualifier, Janessa Segay, which she accepted. 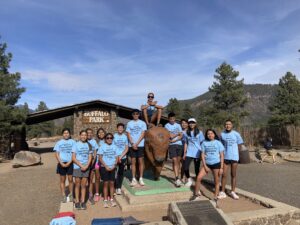 Runners that travelled with Wings to NXN SW after their shakeout run at Buffalo Park in Flagstaff, AZ

Apart from sponsoring the National Team, Wings provided dozens of deserving student-athletes with travel and race registration assistance to attend their regional qualifying race. A caravan of 12 Wings athletes attended the Nike Cross Southwest Regional in Tempe, AZ on November 20, 2021. Dozens of others made the trip with their families, with race registration and lodging covered by the organization. Eight of the sixteen athletes selected for the team received some form of assistance to attend their qualifying race.

A list of those selected for the 2022 Wings National Team and their qualifying times is included below:

In addition to the “Wings Team”, the organization has selected a pair of commendable young adults to serve as a coaches, mentors and chaperones while the team travels to San Diego.

Felicia James (Diné) is a former  Running & Fitness Camp Head Facilitator and currently coaches at Shiprock High School in Shiprock, NM. Previously, she coached at Monument Valley High School in Kayenta, AZ. Her work as a Facilitator was invaluable to the Wings organization over multiple summers. Honorary coaches are chosen as thanks for their commitment to Native youth, with hopes that the opportunity to travel with the Wings Team will increase their knowledge of high level competition and encourage their future pupils to also try out for the team. Thanks “Phishy”!

For the men, Wings has asked Jared Lesansee (Jemez Pueblo/Zuni Pueblo) to join the team on the trip to San Diego. Jared began coaching on a volunteer basis for Albuquerque’s “Running Medicine” group, a program of long-time Wings collaborators, Native Health Initiative. He then volunteered as an assistant cross country and track coach at Bernalillo High School from 2019-2021. This fall (’21) was his first season as Head Cross Country Coach. With his help, the Lady Spartans returned to the New Mexico State Cross Country Championships as a team for the first time since 2011. He will continue to build the program as the Distance Coach for the track team this spring.Two of Jared’s younger brothers, Ryan and Jordan, have run on previous Wings National Teams. The Lesansee family is proud to be known as runners.

Wings created the Wings National Team opportunity to showcase the talents of American Indian youth and provide them with exposure to higher levels of competition in the company of runners from other Tribes. Many program alumni have earned the attention of college coaches and/or a spot on a junior national team competing for “Team USA” internationally. Wings National Teams have captured 33 national titles since their debut in 1988.