Members of the 2013 Wings of America National Team were selected based on their performance at premier championship-season cross country meets (Nike Cross Regionals; “NXR” or Footlocker West). Overall times factoring course difficulty, course conditions and weather were considered by program director Dustin Martin and Wings-affiliated advisors in order to select the top seven individuals for both the men and women’s teams. With a large influx of eligible applicants in comparison to years past, the selection pool (67 student-athletes in total) was the most competitive it has been in over a decade. When all was said and done, 53 student-athletes posted qualifying times across four distinct regions. Though it is was extremely difficult to select just 14 runners from this impressive group of dedicated athletes, Wings of America is honored to name the official members of the organization’s 2013 USATF Cross Country Championships National Team:

For a re-cap of the 2013 National Team’s performance in St. Louis, click HERE.

(Alphabetical order by first name; Selected student-athletes in bold; does not include dns or dnf applicants)

More on the recruitment process and thank-you’s…

As the 2012-2013 school year began, it was Wings’ goal to vastly improve and expand the organization’s 2013 National Team recruitment efforts. Starting with early-season meets in New Mexico and Arizona, Wings program director, Dustin Martin, made a conscious effort to remain visible and approachable through the fall. Also, by reaching out primarily to coaches, school athletic directors and running media outlet coordinators/editors- rather than individual athletes- Wings was able to disseminate information about the 2013 team selection process in a manner that encouraged participation while avoiding an image of favoritism.

Once again, Wings partnered with Nike Cross Nationals (NXN) to use their regional qualifying championships as selection races for the Wings team. In cooperation with the NXN’s national coordinator, Abby Samuelson, and her national organizing committee, information about the 2013 National Team selection process made it to corners of the country that have seen little Wings participation over the past decade. Thank you to Abby and her team for so graciously promoting the Wings mission and message!

Student-Athletes from the Gallup, NM area pose in front of the Wing s camp at the NXR SW regional on 11/17/12

In early October, Wings learned that the organization was to receive a generous gift from the Oppenheimer Brothers Foundation to help supplement recruitment efforts and assist interested and deserving athletes with travel, race-registration costs and accommodations while attending regional qualifying races. These funds proved immeasurably helpful for non-southwest-region runners looking to attend qualifying races far from their homes and their support networks. Wings was proud to earnestly assist runners from the Rosebud Sioux Reservation and Central Oklahoma as they attended their Nike Cross Regional (NXR) races in the Heartland and South regions, respectively. In the southwest, we were honored to assist recent AZ state champions, the Hopi HS Lady Bruins, with gas money as they caravanned down to Mesa for the NXR SW race. Aside from helping a number of other SW athletes with race registration and travel costs, Wings was able to rent a van and provide transportation to the race for a group of six athletes from the Gallup, NM area that would not have been able to make it to their selection race without outside assistance. Program director, Dustin Martin, served as driver and chaperon. 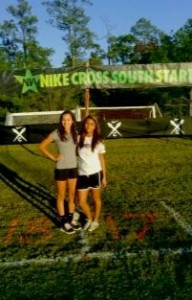 Student-athletes from Oklahoma pose in front of the NXR South finish line on 11/16/12 while previewing the course for the next day’s competition.

THANK YOU TO THE OPPENHEIMER BROTHERS FOUNDATION FOR PROVIDING THE MEANS TO VASTLY IMPROVE OUR NATIONAL TEAM RECRUITING EFFORTS! Your gift has also made it possible for us to offer spots on the Wings team to 14 (rather than 12) deserving young men and women for the year 2013.

As Wings pushes on, the organization is always looking for constructive feedback and or comments to help us improve the programs we care so deeply about. Please use the comments section of this page (below) to offer any compliments or criticisms that will help us further develop our premier athlete development program in the future. Thank you.